ERP Ireland and Barretstown have teamed up with renowned Irish artist and designer Helen Steele, to mark the success of their joint initiative ‘Batteries for Barretstown’. The campaign is now in its fourth year and was created to educate Ireland on the importance of battery recycling, increase the number of batteries recycled and raise much-needed funds for the children’s charity. Since 2017, the equivalent of over 62 million AA batteries have been recycled – enough to circle the island of Ireland! 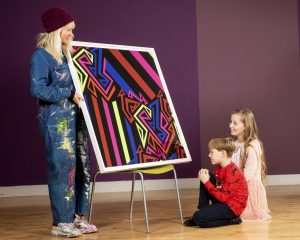 To mark the success of the Batteries for Barretstown campaign, internationally renowned Irish artist, Helen Steele has created a bold and dramatic piece of art to live at Barretstown. She also created a second piece in black and white to allow Barretstown campers to leave their mark with their own colourful brush stroke.

To continue to ‘Power more Positivity’, Helen will host an art class at her studio in Monaghan which will run as part of ‘Barretstown Live’ – an online interactive platform to livestream Barretstown’s programmes into homes nationwide. This will air on Barretstown Live on February 27th and will be available to the public on ERP Ireland’s YouTube and Facebook Channels thereafter.

Martin Tobin, CEO, ERP Ireland said: “Batteries for Barretstown has captured the hearts and minds of local communities across the country since its launch in 2017, being recognised with numerous awards over the years. I would like to thank the Barretstown team, campers and supporters, and the public for their contribution to this phenomenal achievement. The message is simple - by recycling your batteries you are not only benefiting the environment and saving precious materials for re-use, but you are also helping support the children and families at Barretstown.” 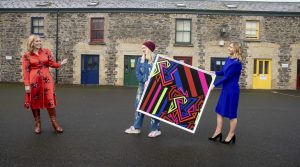 Helen Steele, Irish Designer, and artist said: “I was really thrilled to be asked to participate in such an exciting project. I love the ethos of ERP Ireland’s Batteries for Barretstown campaign. It was great to be able to visit Barretstown itself to learn about the incredible work they do there. The campaign is all about ‘Powering Positivity’ and there is nothing that makes me feel more positive and upbeat than playing with paint and colour, and the piece I created reflects those values. It was also such an incredible experience to share my favourite art tips and tricks with the campers on Barretstown Live – this interactive programme is so vital for children and their families all across Ireland.”

Dee Ahearn, CEO, Barretstown said: “The Batteries for Barretstown battery recycling campaign has been a very exciting project for us, and we are thrilled to be involved in helping to motivate people to become more environmentally aware and to change their battery recycling habits. We are very excited about the positive energy being generated by the campaign. We cannot help but admire the beautiful artwork created by Helen Steele to hang in Barretstown. And we know that when we welcome our campers back, they are going to really enjoy it too. We are very grateful to have something so colourful and uplifting to commemorate this campaign.”

Almost 50% of batteries sold in Ireland end up in landfill because they have been thrown out in domestic waste, so the valuable materials inside are lost forever. When batteries are disposed incorrectly their corrosive materials can be harmful to the environment. Most types of batteries contain metals such as nickel and mercury, but these materials can be reused if disposed of properly. This call to action comes on the back of the publication of the government’s recent Waste Action Plan for a Circular Economy which outlines the creation of a Circular Economy Unit within government, tasked with developing an all-of-government circular economy strategy.